Researchers from four universities, including Michigan State University plant biologists and Ecology, Evolution, and Behavior members Marjorie Weber and Ash Zemenick, participated in a study to explore a potential demographic mismatch in scientists featured in biology textbooks and the students who use them.

The resulting research paper, “A scientist like me: demographic analysis of biology textbooks reveals both progress and long-term lags,” was recently published in the biology journal Proceedings of the Royal Society B: Biological Sciences. 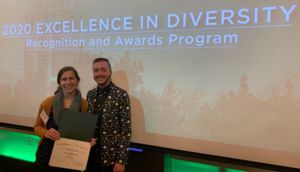 “Seeing a diversity of scientist role models can have a tremendous impact on young minds,” Weber said. “Every student should have the experience of seeing for themselves that scientists can be like them, and that they, in turn, can be a scientist.”